Tulip Fever – A 17th century romance in which an artist falls for a married young woman while he’s commissioned to paint her portrait. The two invest in the risky tulip market in hopes to build a future together. Starring Oscar winners Alicia Vikander, Christoph Waltz, and Judi Dench!

The Midwife – Held Over for a 2nd Week! Claire is a midwife and has devoted her life to others. At a moment when she is preoccupied by the imminent closure of the maternity clinic where she works, her life is further turned upside down when Béatrice, her father’s former mistress, turns up on the scene.

Lucky – Ottawa Premiere! The spiritual journey of a 90 year old atheist and the quirky characters in his off the map desert town. Having out lived and out smoked his contemporaries, the fiercely independent Lucky finds himself at the precipice of life, thrust into a journey of self-exploration, leading towards that which is so often unattainable: enlightenment.

Limehouse Golem – Ottawa Premiere! Halloween Month! A series of murders has shaken a community to the point where people believe that only a legendary creature from dark times – the mythical Golem – must be responsible. Starring Golden Globes, and BAFTA winner Bill Nighy! From the screenwriter of The Woman In Black, and X-Men: Days Of Future Past!

Jason Goes To Hell: The Final Friday – Halloween Month! The secret of Jason’s evil is revealed. It’s up to the last descendant of the Voorhees family to stop him before he gains unstoppable immortality. The final battle to end Jason’s reign of terror forever! Spoiler alert – Not actually Jason’s final battle.

The Monster Squad – Halloween Month! 30th Anniversary! You know who to call when you have ghosts but who do you call when you have monsters? From writer Shane Black (Lethal Weapon) and writer / director Fred Dekker (House), this cult favourite that pits small-town kids against the classic movie monsters! 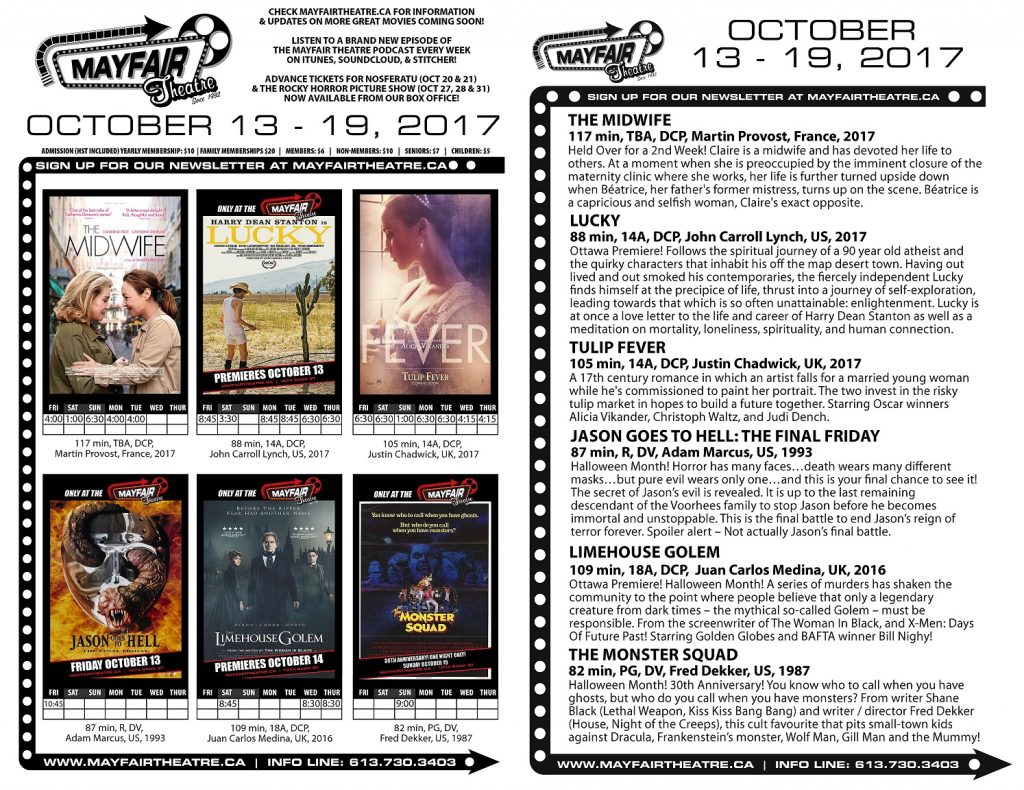