The Midwife – Claire is a midwife and has devoted her life to others. At a moment when she is preoccupied by the imminent closure of the maternity clinic where she works, her life is further turned upside down when Béatrice, her father’s former mistress, turns up on the scene.

Accidental Anarchist – Ottawa Premiere! Carne Ross was a career diplomat who believed Western Democracy could save us. Working inside the system he felt first hand the corruption of power. After the Iraq war he quit his job and started searching for answers. The film’s researcher, Liam Barrington-Bush, will be in attendance for a Q&A at both screenings.

Dunkirk – The Miraculous true story of the evacuation of Allied soldiers from Belgium, Britain, Canada, and France, who were cut off and surrounded by the German army from the beaches and harbor of Dunkirk, France, between May 26 and June 04, 1940, during the Battle of France in World War II.

Bad Grandmas – Ottawa Premiere! You don’t want to see this bucket list! Four grandmothers accidentally kill a con man and must cover it up when his partner arrives. A crime comedy starring Pam Grier, Florence Henderson, and Judge Reinhold!

Suspiria – Halloween Month! 40th Anniversary – 4K Restoration! The most frigtening film you’ll ever see! Once you’ve seen it, you will never again feel safe in the dark! A ballet academy newcomer realizes the school is a front for something far more sinister and supernatural amidst a series of grisly murders.

Despicable Me 3 – After he is fired from the Anti-Villain League, Gru finds himself in the midst of an identity crisis. When a stranger shows and informs Gru that he has a long-lost twin brother, who wishes to follow in his twin’s footsteps, one former super-villain rediscovers how good it is to be bad. 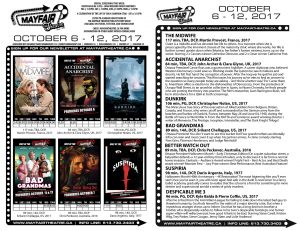