Lost In Paris – 2nd Week! When Fiona’s life is disrupted by a letter of distress from her Aunt, she hops on a plane to Paris, arriving to discover that she’s disappeared. In a run of spectacular disasters, she meets an affable, but annoying tramp who won’t leave her alone. A fun and hectic tale of peculiar people finding love while lost in the City of Lights!

The Villainess – Ottawa Premiere! After the death of her mentor, with the chance of starting a new life, an assassin becomes a government agent. She is promised freedom after ten years of service. Soon after, two men appear in her new life, and she discovers deep dark secrets about her past. Eventually, she must take matters into her own hands.

Viceroy’s House – New Dehli in March 1947. The huge and stately Viceroy’s Palace is like a beehive. The new (and last) viceroy of India, whose difficult task consists of overseeing the transition of British India to independence arrives, accompanied by his liberal-minded wife and his teen daughter. Meanwhile, in the staff quarters, a love story is begins.

Saturday Morning All-You-Can-Eat-Cereal Cartoon Party – Remember when Saturday mornings were a wonderland of animated adventures, commercials, and cereal? Tune back in those memories with 3 hours of cartoons (with retro ad breaks), plus a cereal buffet! Feel free to bring your own spoon and (reasonably sized) bowl. Pajamas encouraged!

The Rocky Horror Picture Show – Do the time-warp again! Plus, mark your calendar for the Halloween Month edition screenings on October 27th, 28th, and 31st! Don’t miss our one-of-a-kind sing-along featuring the spectacular Absent Friends shadow cast! Nobody does Rocky Horror like the Mayfair! (Please, no rice or confetti; use bubbles!) 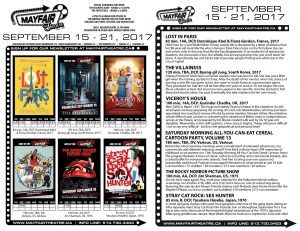