Detroit – Amidst the chaos of the Detroit Rebellion, with the city under curfew and as the Michigan National Guard patrolled the streets, three young African American men were murdered at the Algiers Motel. From the Oscar winning director of Near Dark, The Hurt Locker, and Zero Dark Thirty!

The Trip To Spain – 2nd Week! Steve Coogan and Rob Brydon embark on another deliciously deadpan culinary road trip. They head to Spain to sample the best of the country’s offerings in between rounds of off-the-cuff banter, barbs and impressions, as well as reflections on settling into middle age.

The Last Dalai Lama? – Ottawa Premiere! A documentary portrait of the 14th Dalai Lama, featuring interviews with his family and the people he has inspired since his exile from Tibet in 1959.

The 18th Annual Animation Show Of Shows – Ottawa Premiere! 16 new shorts! Highlights include “About a Mother”, a new folktale with echoes The Giving Tree, Pixar’s “Piper”, and the latest in 360º storytelling in Google’s touching father-daughter-journey “Pearl” by Oscar winner Patrick Osborne.

Temple – Ottawa Premiere! Three American tourists follow a mysterious map deep into the jungles of Japan searching for an ancient temple. When spirits entrap them, their adventure quickly becomes a horrific nightmare. From the 2 x Austin Fantastic Fest award winning writer of You’re Next, and V/H/S! 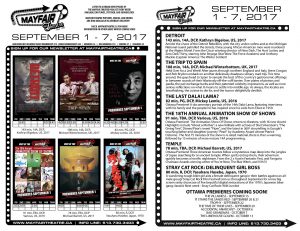