The Women’s Balcony – An accident during a bar mitzvah celebration leads to a rift in a devout Orthodox community in Jerusalem, in this rousing, good-hearted tale about women speaking truth to patriarchal power. Hebrew with English subtitles.

An Inconvenient Sequel – A riveting Inconvenient Truth follow-up shows how close we are to an energy revolution. Al Gore continues his fight, traveling around the world training climate champions and influencing climate policy. Stakes have never been higher, but climate change perils can be overcome.

Viceroy’s House – Held Over for a 2nd Week! Lord Mountbatten takes the post of last Viceroy, charged with handing India back to its people, living upstairs at the house which was home to British rulers, whilst 500 Hindu, Muslim and Sikh servants lived downstairs.

Trophy – Ottawa Premiere! The evolving relationship between big-game hunting and wildlife conservation that will leave you debating what is right, wrong, and necessary in order to save the great species of the world from extinction.

Stray Cat Rock: Machine Animal – Two Japanese men help a Vietnam war deserter escape from Japan for Sweden! They plan to fund the escape by selling LSD, and after word of the drug deal gets spread around they find themselves fending off rival gangs!

It Stains The Sands Red – Ottawa Premiere! In the throes of a zombie apocalypse, a troubled woman from Las Vegas with a dark past finds herself stranded in the desert with a lone and ravenous zombie on her tail.

The Room – A banker lives in San Francisco with his fiancée. One day, she gets bored with him and decides to seduce his best friend. From there, nothing will ever be the same. It’s our unbelievable 97th Consecutive Month screening The Room! The countdown is on to our epic 100th month in December! 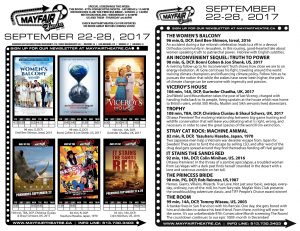