The Women’s Balcony – Held Over for a 2nd Week! A bar mitzvah mishap causes a major rift in a devout Orthodox community in Jerusalem. Hebrew with English subtitles.

Baby Driver – A talented, young getaway driver relies on the beat of his personal soundtrack to be the best in the game. But after being coerced into working for a crime boss, he must face the music when a doomed heist threatens his life, love and freedom. From the director of Shaun of the Dead!

Viceroy’s House – Held Over for a 3rd Week! Lord Mountbatten takes the post of last Viceroy, charged with handing India back to its people, living upstairs at the house which was home to British rulers, whilst 500 Hindu, Muslim and Sikh servants lived downstairs.

The Time Of Their Lives – Ottawa Premiere! A former Hollywood star enlists the help of a new friend in order to journey from London to France for her ex-lover’s funeral, with the various mishaps en route making the trip unforgettable.

Stray Cat Rock: Beat 71 – The finale of a true rarity showcase of five beautiful digital restorations of 1970’s Japanese biker gang grindhouse classics. The epic series swansong sees Kaji framed and imprisoned by her boyfriend’s father. With the help of some hippies she strives to be re-united with her gang!

Saturday Night Sinema – Dig it! We’re back with another dose of dangerous, not-in-distribution cinema. What are we showing? We can’t tell you that, but we guarantee you won’t be disappointed. This month, an extra special 35mm presentation of a modern classic that you won’t want to miss! Free screening for members only / Annual membership $10! 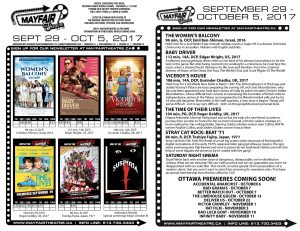