Lost In Paris – Fiona’s orderly life is disrupted by a letter of distress from her 88-year-old Aunt Martha in Paris. She hops on the first plane she can and arrives to discover that Martha has disappeared. A wondrously fun and hectic tale of peculiar people finding love while lost in the City of Lights.

A Bag Of Marbles – In occupied France during World War II, two young Jewish brothers, Maurice and Joseph, are sent by their parents to the free zone, and display courage, intelligence and ingenuity as they escape the occupiers and try to reunite their family.

Good Time – After a botched bank robbery lands his younger brother in prison, Constantine embarks on a twisted odyssey through the underworld. Over the course of one adrenalized night, he finds himself on a mad descent into violence and mayhem as he races to save his brother and himself.

Jholmolia: The Secret Water – At a village in Bangladesh, a pond adds sparkle to the life of its people. It is the only source of drinking water for the residents. In 2009, a cyclone flooded the region; the pond was miraculously spared. An intimate observation of the community in the aftermath of a cyclone. Q&A with the director after the screening!

Ottawa Film Society (Private Screenings) – It’s the 83rd season for OFS hosting its International Series, showcasing the best films from throughout the world. Membership entitles you to eighteen great films on nine nights from September to May. For more info on Canada’s oldest film society, please visit filmfilmfilm.ca 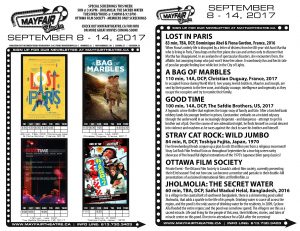