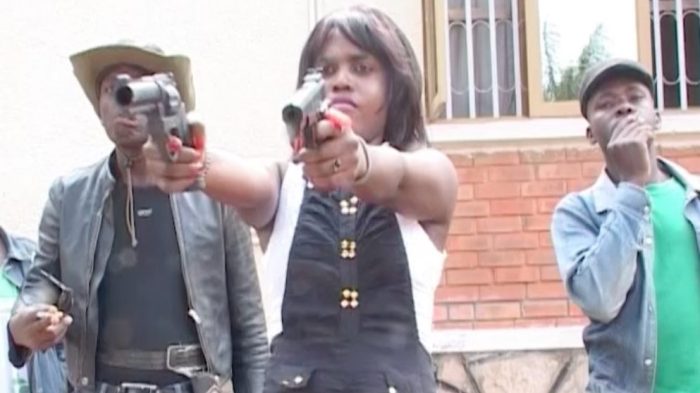 An American Genre Film Archive Ottawa Premiere on Thursday May 23rd – One Night Only!

*A special last minute surprise, we’ll have the 2x Fantastic Fest award winning director of Bad Black on screen via Skype for a q&a after the film!

“a mild-mannered doctor, portrayed by Wakaliwood producer Hofmanis, is trained in the art of ass-kicking commando vengeance by a no-nonsense ghetto kid named Wesley Snipes(!) in an effort to steal back a family heirloom from Uganda’s toughest gang. A multitude of subplots ensue at a breakneck pace as Nabwana hurls his charismatic cast through bombastic firefights, dizzying motorcycle chases, and an absolutely madcap prison riot – all photographed with a thrilling gonzo panache and seeped in gleefully silly, self-deprecating humor. And in Uganda’s finest storytelling tradition, the films are complemented by the acerbic wit of narrator/”Video Joker” VJ Emmie, who sums up the Wakaliwood experience with a single sentiment: ‘It is a love story…LOVE OF ACTION!’” (Fantastic Fest)

A mild-mannered doctor is trained in the art of ass-kicking commando vengeance by a no-nonsense ghetto kid named Wesley Snipes.
© 2023 Mayfair Theatre
Site by 3VL INC.